Corporal Gracie Novin is a member of Australian Army Special Operations Command working with Section 20. She is ambitious, fierce and will always speak her mind.

Novin speaks an array of different languages. Her national dialect, English, as well as being fluent in Russian and Arabic and conversational in Mandarin, Indonesian and Malay.

In Season 7 it was revealed that She is Bisexual after the loss of former fling, Zoe Davis. 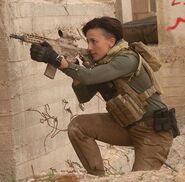 Add a photo to this gallery
Retrieved from "https://strikeback.fandom.com/wiki/Gracie_Novin?oldid=9006"
Community content is available under CC-BY-SA unless otherwise noted.