Sergeant Julia Richmond was the chief communication officer and a field operative for Section 20. She was responsible for maintaining contact with operatives in the field as well as assisting them in the field. Richmond was killed in action in Season 5, Episode 4.

In Season 2, Episode 10, She is injured in the attack on Section 20's mobile base in Budapest by Latif's Pakistani Militant Extremists.

Season 3 and Season 4 - Richmond begins to have a more advanced role in the field and goes out on assignments more often, probably due to the lack of Section 20 operatives.

Season 4 - Richmond and Scott start to fall in love and in the season finale start their relationship.

Season 5, Episode 4 - Richmond is kidnapped and killed by Mei Foster whilst on a mission to retrieve vanadium for Advanced Missile tech from the Yakuza and Office 39. She is found dead in the road by Damien.

Unlike some other female members of section 20 (such as Maj. Rachel Dalton or Capt. Natalie Reynolds), Richmond isn´t a former special ops and didn´t serve in the Special Reconaissance Regiment. Serving as a communication officer in Season 2, she had to step up to the field due to the lack of operatives in Section 20. Despite this lack of experience, she is a quick learner. She participates in the operation in Somalia (S03E01) where she ruthlessly kills several militias with her knife. The use of melee weapons is one of her speciality and she makes use of them many times during the Series.

In season 4, Richmond is engaged in two hand to hand combats, both leading to her killing her opponent. She also neutralizes a bar bouncer wanting to prevent them from entering in a bar.

Richmond is also an efficient sniper. 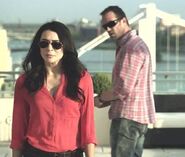 Add a photo to this gallery

Retrieved from "https://strikeback.fandom.com/wiki/Julia_Richmond?oldid=8897"
Community content is available under CC-BY-SA unless otherwise noted.