Captain Kate Marshall was an intelligence analyst with Section 20. She was also one of Section 20's most skilled and experienced undercover operatives.

She and Sergeant Michael Stonebridge had an affair. She was kidnapped by Daniel Connolly's men. Kate was rigged with a bomb. Connelly promises to disarm it if they let him go, however he goes back on the deal and escapes, while Kate dies in the explosion.

Notes: Marshall, the daughter of a diplomat, had a well-traveled family, and grew up in Cairo and London, where she displayed a natural aptitude for learning languages.

- Attended RCB officer training at Sandhurst, excelling in physical combat and marksmanship.
- Studied linguistics at Trinity College, honing language skills and mastering Arabic.
- Applied for work with the intelligence corps, though mostly worked with theoretical exercises.
- In 2004 took MA courses in Pashto and Urdu at London's School of Oriental and African Studies.

Notes: Marshall was well-regarded, with exceptional smarts and surprising strength.

- 2001 - After 9/11, her language skills made her valuable asset in the Middle East, and was transferred by Army Intelligence Corps to Oman.
- 2003 - Worked as liaison with Iraqis, sourcing and briefing local assets; quickly made a strong impression on high ranking officers for her language skill and strategic acumen, and promoted to the rank of 1st Lieutenant.
- 2005 - Returned to the field after additional language study.
- 2006 - Recruited for Force Reconnaissance Unity, receiving SAS training.
- 2007 - Began working with the covert special force 'The Increment' in Pakistan.
- 2010 - Recruited to Section 20 by Colonel Eleanor Grant.

- Exceedingly gifted with languages, Marshall is also an extremely competent field operative, with surprising physical strength.
- Having grown up in Cairo and London, feels at home in almost any environment. Works well with local communities, creating valuable contacts seemingly on the fly.
- Seems almost emotionally drawn to the excitement of the battlefield, where she has fostered deep friendships, and on more than one occasion, romantic interests. 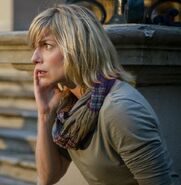 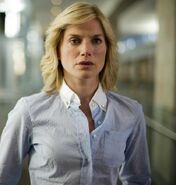 Add a photo to this gallery

Retrieved from "https://strikeback.fandom.com/wiki/Kate_Marshall?oldid=7682"
Community content is available under CC-BY-SA unless otherwise noted.