Captain Natalie Reynolds is a Field Operative for Section 20. That was personally selected by Col. Donovan to join 20 out of Special Recon Regiment .She comes from a military family and excels at psychological profiles.

She was held most responsible for Donovan's death and that she was assigned to guard charity organisations in Sudan as punishment.

As an ex-Special Reconnaissance, Reynolds is a veteran commando with extensive experience. Determined, intelligent and excelling at psychological profiling, she has outstanding commanding skills. She is the leader of the squad on the field and is also able to act undercover. By this combination of aggressivity, leadership and combat skills, her profile is very similar to Major Rachel Dalton, the other female officer leading the team in the past.

She is a ruthless battleground soldier and is particularly talented in assaulting enemy positions. She successfully leads the attack on the terrorist outpost (S06E01) and operates a very spectacular and bloody charge together with Corporal Gracie Novin against a building defended by a large group of russian spetsnazs, killing many of them in the process (S06E06).

Reynolds can more than hold her own in a hand to hand fight. She fights two bodyguards in a nightclub (S06E01), throwing one of them down the balcony and stabbing the neck of the second one with a high heel. She also gets in a close combat situation with a spetsnaz soldier, as she progressed too fast forward during the assault, After a short struggle, she manages to overpower and kill him (S06E02).

Reynolds ocasionally puts her knife into use. She infiltrates hostile positions and silently kill enemies with this weapon (S06E02). 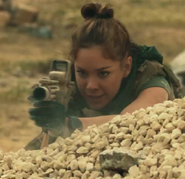 Add a photo to this gallery
Retrieved from "https://strikeback.fandom.com/wiki/Natalie_Reynolds?oldid=9213"
Community content is available under CC-BY-SA unless otherwise noted.