Major Rachel Dalton was the commanding officer of Section 20 after the death of Colonel Eleanor Grant. After leading the effort to locate Conrad Knox, she suffered a wound when the nuclear weapons failed to detonate. In his rage, Conrad Knox shot Major Dalton in the stomach before attempting to flee. Dalton surrvied the wound, but was later killed by Mairead McKenna in Season 4.

Dalton had a reputation for getting results quickly, prepared to use all available resources to develop critically important network of intelligence in the fight against terrorism.

Superiors of Dalton are believed to have overlooked minor cases of insubordination and unorthodox methods because of her ability to get positive results. Dalton was commanding officer of Section 20.

Major Dalton was suspended by Locke when he became concerned with her actions. Dalton reacted badly to this and kidnapped a prisoner named Sophie because Dalton believed that Sophia knew where Al-Zuhari was.

Lieutenant Colonel Locke orders Leo Kamali to find Major Dalton. Kamali finds Dalton and the pair trick Sophia into thinking she had escaped, the pair then followed Sophia to a building where Dalton then established contact with Locke. He ordered her to wait for back up but she heard gunshots and ran to where she last saw Sophia. Dalton found Sophia shot and continued to look around, where she was then shot again by an unknown female. This suspect was later identified as Mairead McKenna after audio was analysed.

Rachel Dalton is a very experimented, aggressive and complete operative. She can lead a team of soldiers on the tactical level or operate on her own in difficult situations. She proved to be deadly on several closed quarter situations against multiple ennemies. In Lebanon she killed the three assassins penetrating in her hotel room and broke the neck of the last one after interogating him (S04E01). She is efficient with any type of weaponery, from automatic weapons to rocket launchers

She is a skilled sniper and covers the team in the assault of a mercenary camp. 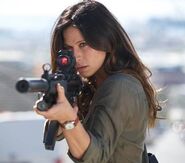 Add a photo to this gallery
Retrieved from "https://strikeback.fandom.com/wiki/Rachel_Dalton?oldid=8687"
Community content is available under CC-BY-SA unless otherwise noted.