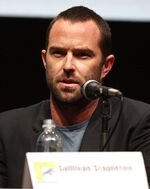 Sullivan Stapleton is an Australian actor who plays the role of Sgt. Damien Scott in Season 2, Season 3, Season 4 and Season 5.

Sullivan has a sister who herself, is an actress. Her name is Jacinta Stapleton and she is famous for her role in Neighbours. In August 2013, Australians in Film announced that Stapleton ill be honored on October 24, 2013 with a Breakthrough Award at an exclusive Benefit Dinner held in Los Angeles.

Retrieved from "https://strikeback.fandom.com/wiki/Sullivan_Stapleton?oldid=7869"
Community content is available under CC-BY-SA unless otherwise noted.